Out of Africa – down at the cabin

We had a party last week down by the river, in the cabin. Paul bought some huuuge pieces of canvas – it made all the difference just closing in the space and making it more cosy and confined, best decision of the lot. Phil made a BBQ from the peacocks drinking trough and some wire mesh – genius idea, the girls in the sewing room made 20 meters of linen bunting – party necessity. I gathered together a mountain of goodies from the Mill showrooms which were transported down to the cabin and arranged in a haphazard way, thus recreating a vintage fair of sorts……… but it worked perfectly and my excuse was, it’s not all about clean simple lines and minimal living you know, let’s have a bit of junkyard cool meets colonial camping. It also showed us how versatile the cabin is. It was such fun to transform the space so dramatically. Phil, who spends his weekends up at the cabin, keeps it all so neat and simple so it really was a changing rooms type afternoon, we even bought a chicken along, poor Phil!!! I have a never ending dilemma in my head, do I prefer neat and chic or eclectic and cluttered, this stretches from interiors to my wardrobe. I just can’t help loving the idea of life with everything smartly organised, but when it comes down to it I need a bit of clutter, well organised but still lots of it. If it’s a necklace I need three, if it’s a space I need to fill it, my rule is start with lots and remove gradually until the desired look is achieved. ……….and so it was a perfect time to get a few shots of the cabin, it was dressed for the party so Tim and I had the best excuse to spend an afternoon down by the river, we even came back to get some evening shots it looked sooo pretty with the candles. I won’t post any actual party pics as that’s probably Paul’s job, it was his family celebrating a big birthday. We have so many magazines wanting shots of the cabin since Paul blogged about the whole cabin thing and how it was created, it was such a great read everyone wanted more. So the ‘first cabin party’ blog seems a given from Paul. It will of course go off  at a tangent and be five times longer than any normal blog, but that whats makes Paul’s ones so popular and personal. 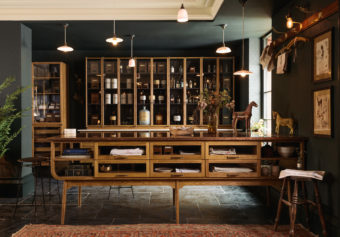 Our Bond Street Showroom in NoHo, NYC - The Haberdasher’s Kitchen 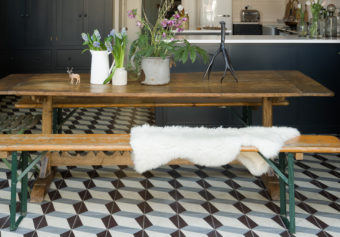 What kind of flooring should I go for in my kitchen?