If you have a sweet tooth

Last weekend my boyfriend and I visited London and whilst there we went for an afternoon tea. This was no ordinary afternoon tea though, it was Charlie and the Chocolate factory themed. Served at the One Aldwych hotel in Convent Garden, there is no other word to describe it than “amazing”.

As soon as you arrive you can tell that the staff are excited about what you’re going to experience. Taken to our seat we were talked through the menu and I got a little giddy. We got a selection of sandwiches to start, egg mayo, smoked salmon and herb crème fraiche and roast beef with grain mustard mayonnaise. Along with a tomato tart and a leek and stilton quiche, that was delicious! We quickly munched our way through them, and got a second serving of the sandwiches and quiche as we were feeling greedy (we had clearly not anticipated the amount of sweets that were to follow). To accompany this you also have a choice of teas, my boyfriend went for the Mango Noir and myself being a chocoholic went for the chocolate tea, yummm. After the selection of savouries, came the sweets and my eyes nearly popped out of my head. I couldn’t believe what had been put in front of us was just for the two of us! I then had the very tough task of deciding what to have first. We both decided we would have the blueberry brioche followed by warm scones with summer berry jam and clotted cream, both were incredible! By this time I had finished my pot of chocolate tea, and had decided to try the Earl Grey Lavender. Next I went for the raspberry trifle, I am not normally a fan of trifle… but this was something else. It was so tasty, I couldn’t stop to answer my boyfriend when he asked me “if it was nice?”. After the scones, brioche and trifle, I needed a little breather and decided to go for a serving of chocolate caramel milk (presented in a mini glass bottles with little pink and white straws- they looked adorable). It tasted unbelievable and I made sure I savoured every sip, so that it would last me as long as possible……… I then only had the doughnut, candy floss and golden chocolate egg left, and it was a tough decision of what to eat next. I went for the doughnut filled with rhubarb and vanilla, yum yummmmm. Writing this is making me hungry!

Next up was the golden chocolate egg filled with vanilla and mango cheesecake. I only got half way through this before I needed a little break from eating, and I still had the candy floss to go!! After my short breather I resumed eating the egg, but soon got full again. I then decided to eat the candy floss as that isn’t as heavy. When the waiter had put the sweets down on our table he told us we needed to guess the flavour of the candy floss. After trying it I quickly said toffee, after we finished we were told we were close but it had used an actual sweet. We finally worked out it was Werther’s Original candy floss. In the end I never got to finish my golden chocolate egg, I simply was too full!! I highly recommend the afternoon tea to anyone who has a sweet tooth, it is a lovely way to spend an afternoon in London. My one tip is, don’t eat a lot before you go, you will appreciate it after! Whilst you’re in London you can also pop into our showroom in Clerkenwell and say hello. 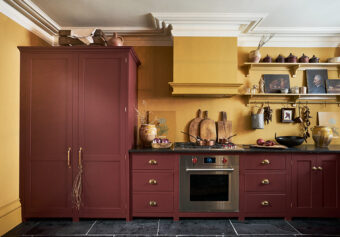 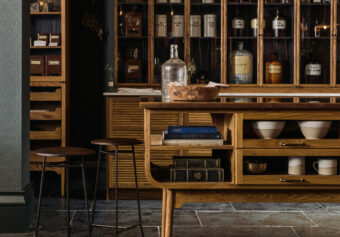